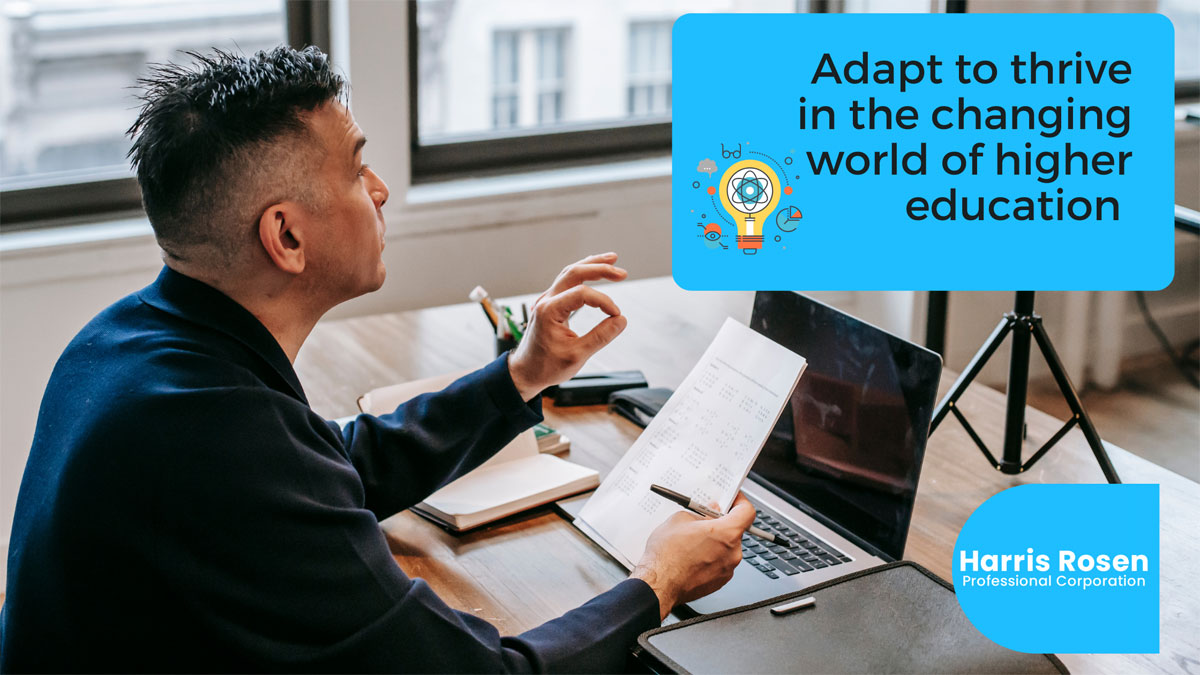 The higher education sector will have to step up its game if Canada is to meet shifting labour market
demands in a fast-changing world.

Existing skills shortages, climate change, and an aging population will each exert their own pressure on
our economy in the coming years. And while people tend to think of these issues in the context of big
government and big business, I believe that meeting each of the challenges they pose starts with
education.

The traditional model of higher education is going to be unrecognizable within a decade, and the future
will belong to those institutions that can change not only what we’re learning, but how we’re learning it.

Anyone who has tried to install a pool or renovate their home recently will have their own unique insight into the skills gap that is currently plaguing Canada.

The long waits and high prices quoted are a consequence of the desperate shortage of supply we are experiencing in masonry, roofing, plumbing, and other skilled trades that we have traditionally taken for granted in this country. This, in turn, contributes to an inflation rate that is already threatening to run out of control.

Meanwhile, the increasingly urgent challenge of climate change is creating demand for new types of expertise and skills that would have sounded outlandish a few decades ago — think wildfire management or drone training.

Back in October 2017, I got a close-up look at some of the rippling effects of climate change as the deadliest set of wildfires in California’s history swept through the northern part of the state, taking with them the lives of 47 people, as well as the homes of 9,000 families, including my own.

I would argue with anyone who claims that Canada is insulated from the worst climate change side effects. In fact, mother nature herself has delivered several strong rebuttals to that idea in the form of recent disasters such as the B.C. mudslides and the Fort McMurray wildfires.

While some have been sounding the alarm on our impending climate emergency for more than 30 years, we have a chance to act a little earlier and more urgently on the developing issue of our aging population.

Government statistics suggest that 25 per cent of Canadians will be over the age of 65 by 2030 if our current birth rate does not dramatically increase by then. Meanwhile, a projection for 1.2 million new entrants to the country in the next three years suggests immigration is at the heart of the plan to boost our dwindling tax base and provide the next generation of personal support workers, truck drivers and paramedics.

The solution: a pivot in higher education

What each of these challenges has in common are accompanying opportunities for higher education institutions to lead the way in radically rethinking what they teach and how they teach it.

Diploma and degree-granting institutions alike will find that their contributions are increasingly valued according to their ability to efficiently deliver graduates with skills that link directly to labour market needs.

Microcredential badging will be a critical part of the offering of the higher education institutions that plan to thrive long into the future. These short programs allow adult learners from various educational or corporate backgrounds to quickly acquire new skills or upgrade existing ones.

The best colleges and universities must also be able to cater to mid-life and internationally trained professionals looking to re-skill – either through necessity or desire.

The good news is that there are already signs of progress in the higher education sector.

Some degree- and diploma-granting institutions have already embraced microcredential badging, while the province of Ontario has committed almost $60 million over three years to support the development of more programs. A drop in the ocean, but yes, a start.

Meanwhile, the recent proliferation of plant-based educational offerings north and south of the border provides a sneak peek at how institutions can adapt to emerging sectors of the economy.

I confess a special interest in the plant-based industry as a committed — albeit recent — convert to veganism, but I expect the trend to continue as businesses respond to increasing consumer demand for greener corporate practices and smaller carbon footprints.

When should a private career college seek degree-granting status?

The virtues and vices of distance learning

While I have been extensively published in the higher education field, I’ve decided to launch…

Public-Private Partnerships: great for colleges, students, immigration, GDP, and even PGWP — but a challenge for education regulators!

Current Rule and Structure Both Ontario and B.C., the two provinces with the lion’s share…